This entry was posted on December 28, 2011 by Angelle Erickson. 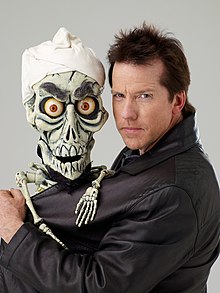 There’s no disputing that lifelong ventriloquist Jeff Dunham has found success with a few jokes and a cast of dolls. He stars in Comedy Central’s highest-rated series in history, and concert-industry magazine Pollstar named him the top-grossing comedy act in the world in 2009 and 2010.

With an empire to uphold, Dunham is under pressure to continually refresh his act. A new BioChannel documentary shows one way he rises to that challenge: a Dimension 3D Printer, which Dunham used to create his newest character.“Usually I would take the clay head, make a silicone mold or a plaster of Paris mold, then put some sort of material in there to make the actual shell,” Dunham says in the film. “Now all I have to do is hit print.”A passionate tinkerer who builds and flies his own helicopters, Dunham embraced 3D Printing for end-use parts as a way to get his ideas onstage faster. “It’s almost science fiction, it’s so cool,” he says in the documentary.

Dunham has that child-like twinkle in his eye that we see a lot around this office when folks experience our printers for the first time. System owners: Do you get this, too?